What are the Benefits of using Engineered Stiles in Wood Louvre Doors?

Louvre doors are in a revival period. No longer thought of as a discarded icon associated with the 70s and 80s, they are once again in vogue and fashionable. Louvre doors might all look the same, but there are often differences between the products available in the market place.

What is a stile? And what are the benefits of using engineered stiles in wood louvre doors? In order to answer this question we must first identify the components of a louvre door.

Typically a louvre door is assembled using four component parts that are fitted together in sequence.  This method allows for automated construction and lower costs. 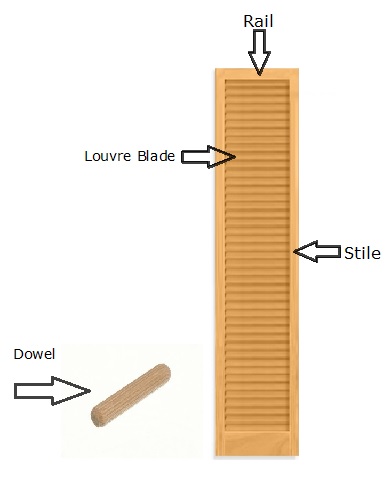 These four separate components are:

Dowels are small pegs used to hold together the components of a structure. In door construction dowels are commonly employed to join the rails and stiles together. Dowelling provides greater strength than gluing alone and is a more cost effective than using mortise and tenon joints.

The louvre blade or louver is often referred to as the slat. Each louvre is inserted into pre routed slots in each of the door stiles to hold it in position.  When the rails are fitted, the louvres become locked in place.

The Stile is the vertical part of the frame of a louvre door. Stiles are routed to accommodate the louvre blades and drilled at the top to accept the dowels that hold the rails in place.

The rail is the horizontal part of the frame that forms the top and bottom sections of the door. The rails are dowelled and glued to the stiles. Sometimes taller doors also use a horizontal centre or offset centre rail, also called a bar or transom, in the construction for added strength and rigidity.

Louvre doors are manufactured using stiles either made of solid wood or engineered wood. 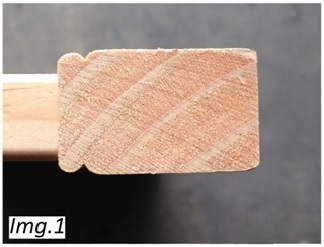 This stile has been cut and shaped from a solid piece of wood. Note the natural grain of the wood.

An engineered stile is made by bonding thin strips of wood together under extreme pressure. Each strip of wood is positioned with the grain facing in opposite directions in a process called laminating. The glue that bonds the pieces together also adds resistance to moisture absorption and loss. 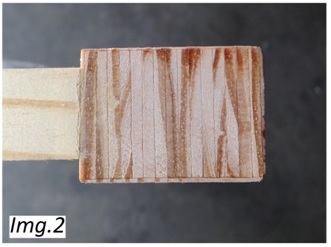 In this picture of an engineered stile, notice how the laminated strips are tightly bonded together and wrapped in a wood veneer to give the appearance of a solid piece of timber.

Engineered wood takes a considerable amount of time and money to produce and is therefore only found in the best quality doors available.

The benefits of using engineered stiles in door construction:

Wood will expand and contract with the seasons and the amount of moisture in the air. As expansion and contraction naturally follows the grain of the wood, doors made with solid stiles are at greater risk of warping and splitting. This often occurs during the winter months when central heating systems dry out the air. Due to their robust construction and opposing grain, doors employing engineered technology are considerably less prone to the variable effects of high or low humidity in the air. This means doors built with engineered stiles last longer than their solid wood counterparts.

Engineered stiles have considerably more strength than standard solid wood stiles. The opposing grain of the laminated sections provides greater stability and strength than a single piece of wood. Timber is always weakest along the grain as each year’s new growth is laid down over earlier years of growth. As wood is a natural material there are often unseen variables that can cause a piece of wood to crack or bow without any indication as to why this has happened.

Thanks to advances in manufacturing processes, engineered stiles look every bit as good as solid wood stiles

Engineering of timber is ecologically sound as it ensures that offcuts of wood that would have previously been disposed of are now ultilised in the construction process.

While solid wood stiles are low cost and quick to manufacture, they simply cannot deliver the stability provided by an engineered stile.

So when you’re looking to buy a louvre door in the future, you now know why you should check and make sure it uses an engineered stile.