If you are purchasing shutters for the first time it is quite possible that some of the terminology used may go over your head. This is understandable as some of the words and phrases used might not be used in everyday conversation. This is where we can help. Here’s our guide to explain the different shutter related words and phrases;

Bracket : A type of fixing to mount decorative (nonfunctional) shutters to the wall. There are many different types of bracket available.

Carcass : The body of the shutter.

Espagnolette : Espagnolette bars have a central handle that rotates to simultaneously send two long bolts into the top and bottom of the window reveal.

Hinge : The bit that actually fastens onto the shutter to allow it to swing on the pintel.

Holdback : Also known as a tie back or shutter dog (USA). Holdbacks keep the shutters to the wall when the shutters are in the open position and stops the shutters from blowing about in the wind. These can take many forms but they all do the same job.

Lintel : The underside of the top of the window opening. When measuring for decorative shutters the lintel is where you would begin your measurement to obtain the height of the shutter required.

Louvre : (Also known as louver/slat/blade). The louvre forms the internal structure of a horizontally slatted shutter. Contrary to common belief louvres can be mounted vertically or even diagonally for effect!. 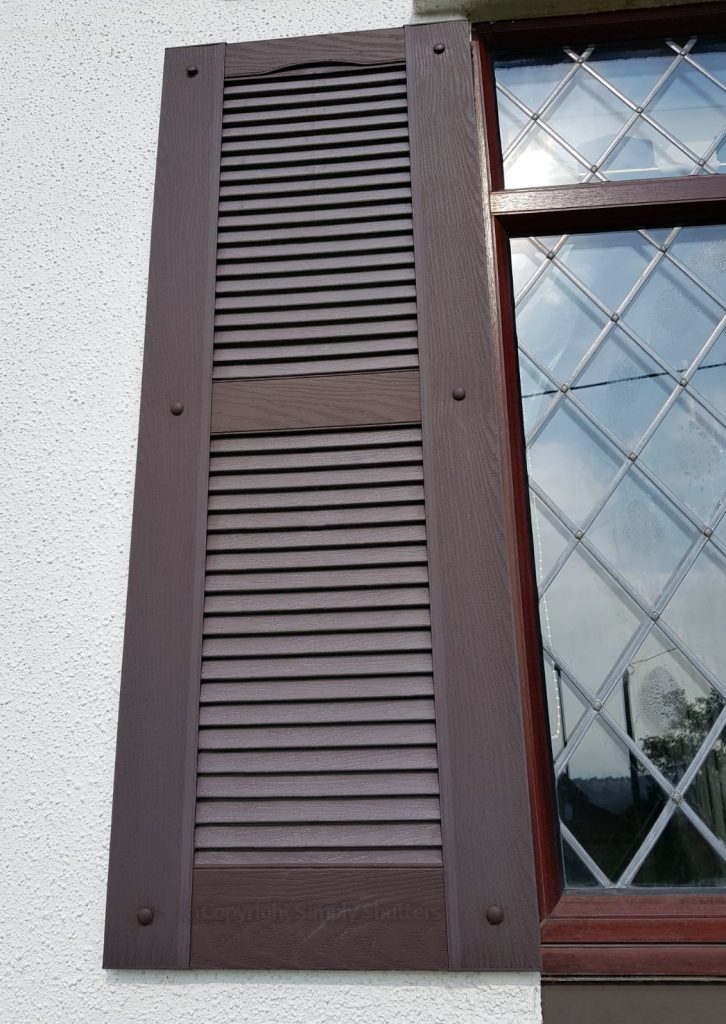 Mouse-hole : The small slot with a curved edge that has been cut into the rail to accommodate the tilt rod when the louvres are in the closed position.

Piano Hinge : A long hinge running vertically up the stile that allows another shutter leaf to be connected to it to make a bi-folding shutter.

Pintel : An ‘L’ shaped fixing into the wall that accommodates the hinges that are mounted on the shutters. The long leg of the ‘L’ fixes into the wall with the short leg sticking vertically upright.

Pintel Plate : Does the same job as the pintel except that this is mounted onto a backing plate that is then fixed to the wall.

Profile : The shape of the material (when viewed end on) used to make any particular part of the shutter itself or shutter frame.

Rail : The horizontal part of the frame that makes the top and bottom of the shutter.

Rebate : (Rabbit-USA). A rebated edge can be given to shutter wings to allow them to lock together or close against each other when closed over the window. Rebated edges will need to be the reverse of each other to be effective i.e. left and right handed rebates.

Recess : The depth that the window is set back from the edge of the facing brickwork.

Reveal : This is the hole in the wall that accommodates the window frame.

S Hook : A type of holdback made in an ‘S’ shape. The S has uneven curves and rotates around a pintel so that it always settles in the upright position. To free the shutters from behind it, the S hook is rotated into a horizontal position that allows the shutter to pass.

Shutter Stop : A small block that allows a shutter to stop in a given position usually mounted on the windowsill or under the lintel.

Slide Bolt : A bolt that locks the two shutters together. Slide bolts differ from ordinary bolts as they are of a flat rather than circular design.

Stile : The upright or vertical part of the shutter frame.

Strap Hinge : A long hinge that fixes onto the rail as well as the stile for added strength.

Tilt Rod : The bar that connects to the louvre blades to allow rapid positioning, opening or closing of all the louvres simultaneously. This feature is predominantly found on interior shutters.

Track :    Where the reveal is very wide or the shutters are too heavy to be hinged, a track is used to support the weight of the shutters. This can be mounted above or below the shutters or both.

Wings :    Also known as leafs or panels. Shutters can be made from any number of wings that hinge together. Bi-fold shutters have 4 wings (2×2) whereas tri-fold have 6 wings (2×3).

Shutter Spike: Shutters Spikes are a type of fixing for external decorative shutters. This is their sole purpose. They are made from a plastic called Polypropylene and have a button head finish and a serrated shank. They are available in various different colours and cannot be painted. 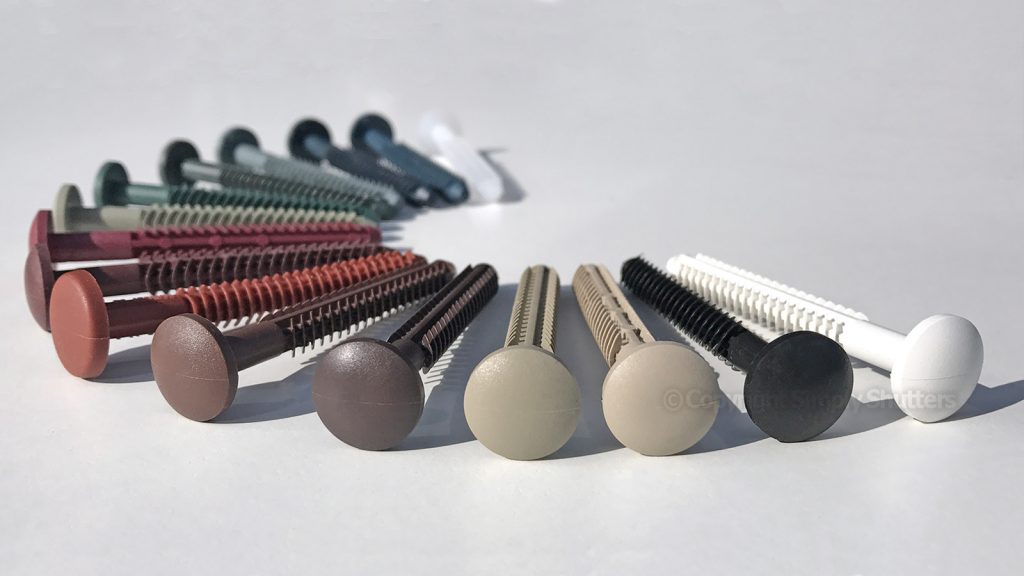 Mullion : A mullion is another name given to the horizontal bar added to external, decorative shutters. Positioning of the bar can differ per design but is usually centrally placed.

Cathedral Top: This refers to the scalloped, arched bottom edge of the top rail of a shutter. This is an alternative style to straight top shutters.

Hollow Box Construction : Imagine a box but with the rear face removed so you could place your hand in it. Our decorative, external Polypropylene shutters are built from component parts and assembled in a way that has a hollow back. Hollow box construction refers to this design.

Component Part: A component part refers to a piece/part of a larger whole. So for example an external shutter is comprised of various components parts assembled together to create a finished shutter.

Synthetic Wood: Is a blend of synthetic polymers that replicates the weight, feel and appearance of wood but does not have any wood elements. This material was developed by Simply Shutters and so the only place you are able to purchase this material is from Simply Shutters in the Town & Country Synthetic range.

Ferrule: A Ferrule is a tube with a flanged lip that can be used to support a shutter at it fixing point. It sits behind the shutter and is fixed into place by inserting a long screw through a pre-drilled hole in the shutter and through the Ferrule into the wall.

Marbella Shutter: A Marbella shutter is a type of shutter that was prominent during the 60’s and 70’s. It was made from a plastic called ABS and was created by moulding a single piece of ABS into the shape of a louvre style shutter. There were no gaps between each louvre blade meaning it was a ‘closed’ louvre design. Manufacture of this shutter was discontinued and as a consequence it is no longer available to purchase. 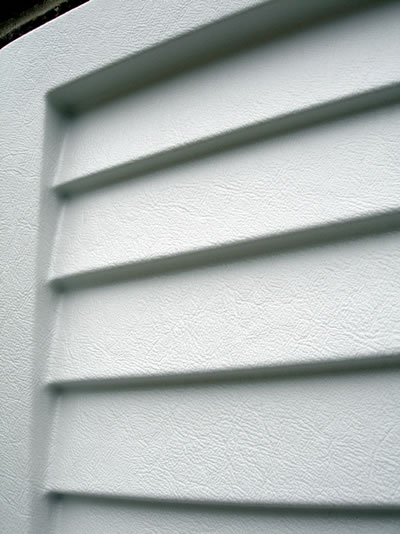 Close up of White Marbella Shutter