1940s Wedding Reminds Us How It Was Done Back Then. 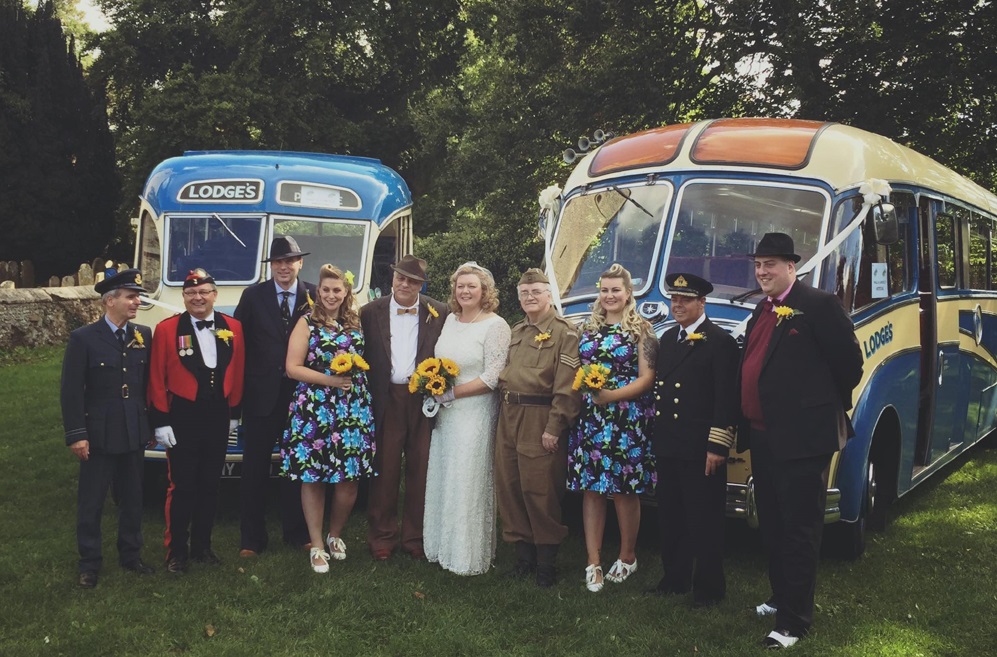 There were over 90 guests in attendance some of whom travelled from as far afield as Dubai and Poland to be present.

The wedding was a little different than your usual wedding and not just because of the theme but because it was the groom who had done most of the organising. Some could even go as far as to say it was reminiscent of ‘Don’t tell the Bride’ with the only difference being the Bride knew all about it.

When asked, Paul said he wanted a 1940s themed wedding “Because I like military history and in watching old war films they often play 1940s music and I’ve always thought it sounded great. Then you look at the fashion and see how smart everybody looked so I thought it would be nice to have a 1940s style wedding to give people the chance to dress up and dance to an authentic swing band”. 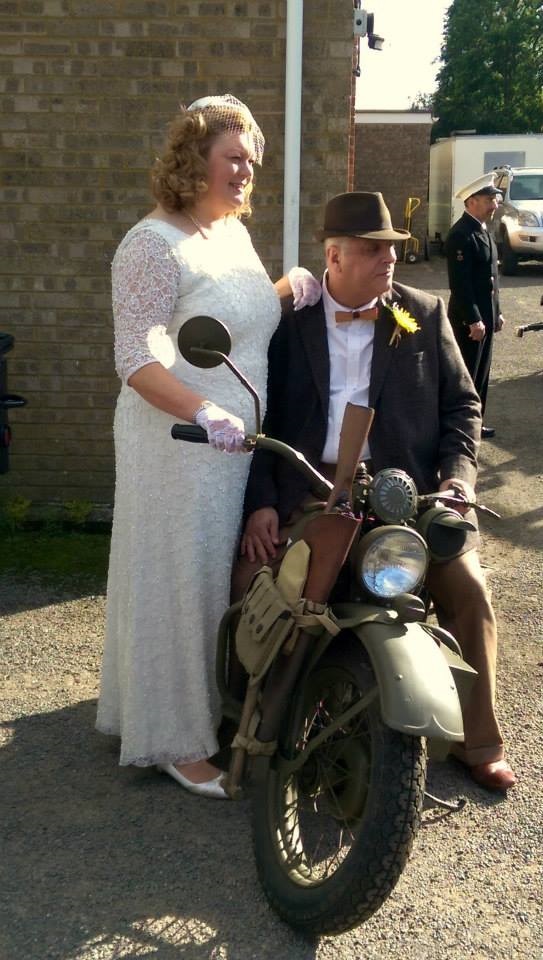 The wedding itself was an eye catching event with great attention to detail coming from both the guests and the organiser. Vintage Bedford Duple coaches were used to transport the guests from their hotels to the church and all the guests really pulled out the stops to turn up in period dress. One guest remarked that whilst everybody was waiting outside the reception hall for the Bride and Groom to arrive from the church it was like being transported back in time by 70 years because everybody looked the part.

Hockwold village hall looked fabulous with military vehicles parked outside and sand bags decorating the doorway. Inside there was Union Jack themed bunting and flags, old WW2 newspapers and posters lacing the walls, and even old style coal tar soap with its distinctive smell and small squares of newspapers as ‘toilet roll’ in the bathrooms. The finishing touch was to give each guest pre decimal coins so they could purchase their drinks at 1940s prices that were displayed on hand drawn chalk boards.

Guests were also given their own ‘ration card’ with the menu shown on it. Dinner was a three course treat with homemade vegetable soup, fish and chips served in newspaper and jam roly poly with custard for dessert. For those who were of a particular age and especially hungry, condensed milk and door stop bread was provided to remind them of their childhood treats. 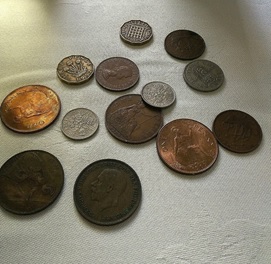 Halfway through their dinner guests were surprised by the sound of a real war time air raid siren being cranked up followed by an ARP warden who ran into the hall blowing his whistle to advise everyone to stay calm as enemy bomber planes were expected to fly over. The scenario was completed with plane engine sound effects played over the loud speakers. All of this added a little extra to the day to enhance the experience for the guests.

As dinner was eaten, a jazz quartet played some wonderful background music to keep everyone in the mood. After dinner and speeches the 12 piece swing band opened up the night’s festivities with a rendition of Frank Sinatra’s ‘Fly me to the Moon’ that the Bride and Groom performed a spectacular routine to, much to the delight of the crowd.

Prior to the band coming on and to enable the guests to fully enjoy the swing music, some light tuition in how to swing dance was given.

Later in the evening a 7 piece modern band took over that played more upbeat, contemporary music for the revellers to enjoy. By this time everyone was up on their feet dancing the night away.

One of the guests said “I have been to a lot of weddings and this is one of the best weddings I’ve ever been to”. 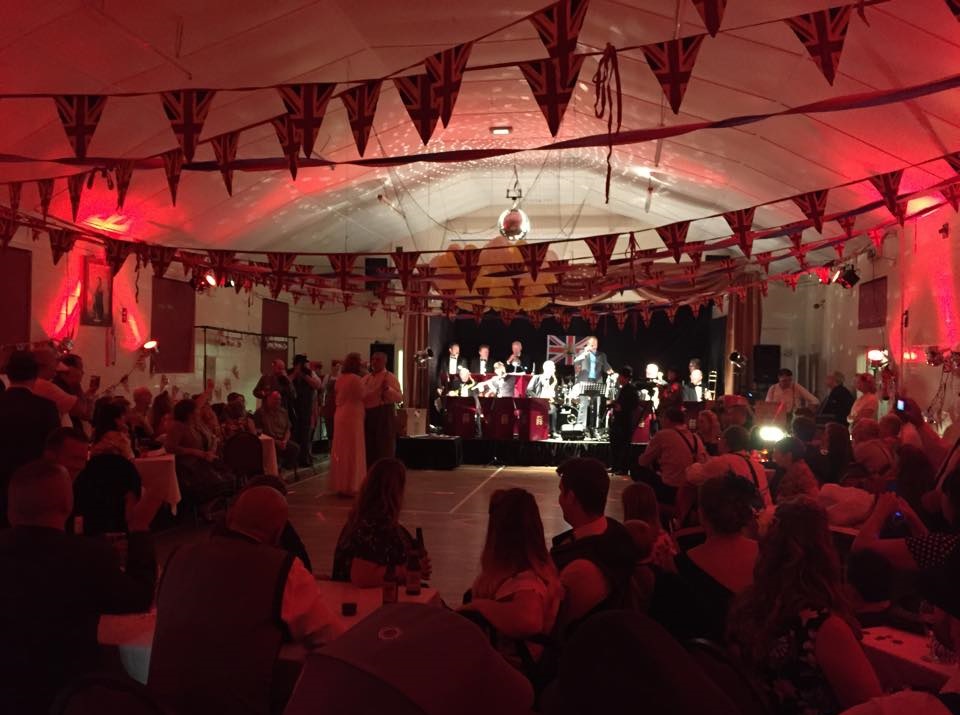 The day was a great experience for all and attracted a lot of attention from the local villagers who were keen to see everybody promenade the 200 yards from the church to the reception at the village hall and to see the old vehicles drive down the road just as they would have done back in the day.

Paul and Carol had such a fantastic day and would like to send their personal thanks for the tremendous contributions from the following:

Eddie Seales Band for putting on a fantastic show.
http://www.eddiesealesbigband.co.uk/

Robbie and Mark at Total Photography for taking all of the still pictures on the day and for mucking in when needed.
http://www.total-photography.co.uk/

Les at LJ’s 4 Entertainment for providing the stage set up all of the fabulous mood lighting in the reception hall.
http://www.ljs4entertainment.co.uk/

Debbie and her team of caterers for providing a delicious three course meal and evening buffet
http://www.delishonwheels.co.uk/index.html

To Linda, Dawn, Sarah and Ann the Waitresses who really got into the theme by dressing as land girls on the day and for providing a brilliant service. Special thanks also to Brian for manning the bar all night.

The Suffolk Military Vehicle Trust and its members for bringing along their WW2 military vehicles for display outside the reception venue.
https://sites.google.com/site/suffolkmvt/home

All the other staff members who helped out on the day.

Last but certainly not least, all the guests for coming and making the day so special.